Nelson Mandela. Mahatma Gandhi. Dr. Martin Luther King. Fela Anikikulapo Kuti. The unknown soldier fighting Boko-haram in Sambisa. What do they all have in common?

Each one of these individuals stepped out of their comfort zone to stand up for what they believed was right regardless of public opinion or occupying a position of power. True courage is risking being uncomfortable regardless of the consequences.

Hereford defines courage as “the mental and emotional preparedness and ability to deal with difficult, challenging, and sometimes seemingly impossible circumstances. It is the ability to confront fear, pain, danger, uncertainty, intimidation and other threats”.

In this very special edition of STORIES THAT TOUCH, we bring you incredible stories of courage from not-so-famous people that will not only inspire you today, but change your paradigm forever. 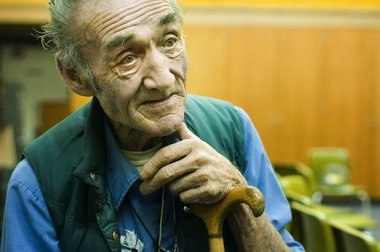 At 59 years old, Andy Mackie had undergone nine heart surgeries and was taking fifteen medications to try to keep him alive, but the medicines left him feeling horrible, so one day, he told his doctors he wanted to stop the drugs.

They told him if he did, he would die within a year, so Andy decided if he was dying, he wanted to do something he’d always wanted to do. So he took the money he would have spent on his medications and used it to buy 300 harmonicas, and he gave them away to children, complete with harmonica lessons. The following month, he was still alive, so he bought another 300 harmonicas. 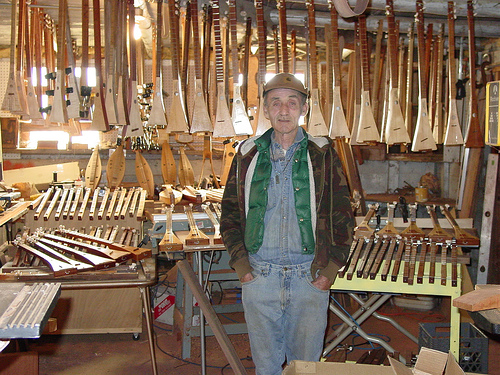 Thirteen years and 20,000 harmonicas later, Andy Mackie finally passed away. Now that’s someone who lived his legend until the last heartbeat. 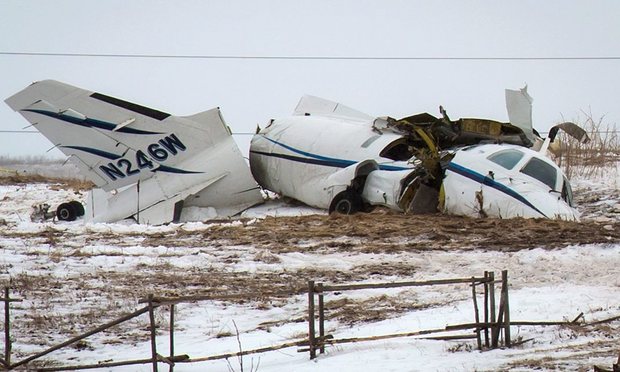 A business man was late for his flight. He reached the boarding gate just before it closed. Sweating and out of breath, he scanned his boarding pass at the counter and quickly made his way to the plane. Arriving at his seat, he greeted his companions for the next few hours: a middle-aged woman sitting at the window, and a little girl sitting on the aisle seat. After stowing his bag above, he took his place between them.

After the flight took off, he began a conversation with the little girl. She appeared to be about the same age as his daughter and was busy with her coloring book. He asked her a few usual questions, such as her age (eight), her hobbies (cartoons and drawing), as well as her favorite animal (horses are pretty, but she just loved cats). He found it strange that such a young girl would be traveling alone, but he kept his thoughts to himself and decided to keep an eye on her to make sure she was okay.

About an hour into the flight, the plane suddenly began experiencing extreme turbulence. The pilot came over the PA system and told everyone to fasten their seat belts and remain calm, as they had encountered rough weather.

Several times over the next half hour the plane made drastic dips and turns, shaking all the while. Some people began crying, and many―like the woman in the window seat―were praying intently. The man was sweating and clenching his seat as tightly as he could, and exclaim “Oh my God!” with each increasingly violent shake of the plane.

Meanwhile, the little girl was sitting quietly beside him in her seat. Her coloring book and crayons were put away neatly in the seat pocket in front of her, and her hands were calmly resting on her legs. Incredibly, she didn’t seem worried all.

Then, just as suddenly as it had begun, the turbulence ended. The pilot came on a few minutes later to apologize for the bumpy ride and to announce that they would be landing soon. As the plane began its descent, the man said to the little girl, “You are just a little girl, but I have never met a braver person in all my life! Tell me, dear, how is it that you remained so calm while all of us adults were so afraid?”

Looking him in the eyes, she said, “My father is the pilot, and he’s taking me home.”

HIS COURAGE TO SAVE THE WORLD SAVED HER

Late in the evening I was walking in the park. Suddenly I heard scream coming from behind bushes. I stopped to listen and understood that a woman was attacked. I heard sounds of fighting and muttering. For several moments I was hesitating, should I get involved?
I panicked. I was frightened for my own safety. Maybe it is better to call the police? Then I realized that a woman‘s voice becomes weaker, so I knew I have to act quickly. Can I run away from this? Finally I decided that I have to help this unknown woman even if I am risking my own life. I felt some strange transformation inside, the moral and physical strength, so I ran behind the bushes. I pulled the attacker off the girl. We felt to the ground and grappled for several minutes. Then the assailant jumped up and ran away.
Breathing hard I slowly came up to the girl, who was cowering behind a tree. It was dark, so I could not see her face clearly. I felt, that she is very frightened, so I talked to her from a distance: „You are safe now, it‘s ok, the man had run away“. After a few moments I heard her words with a great amazement in her voice: “Dad, is that you?” And then I realized that the girl was my youngest daughter.

HE SMASHED A WORLD RECORD WITH NOTHING BUT ROPES 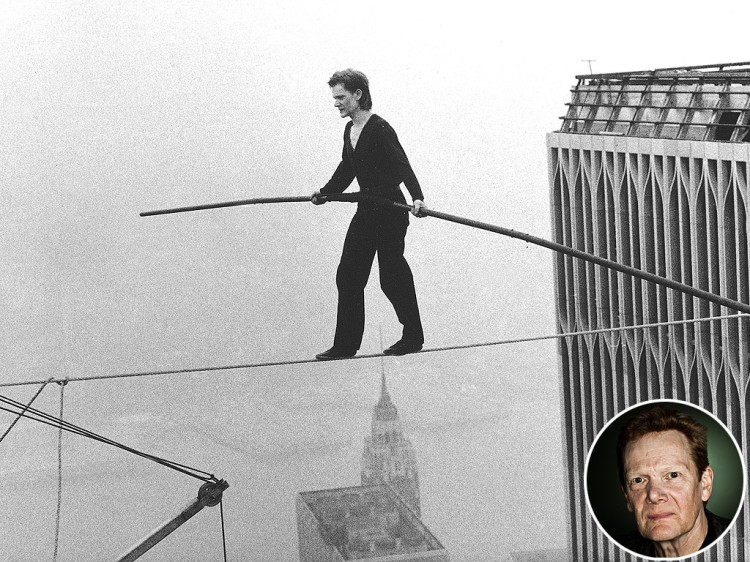 On 7 August 1974, Philippe Petit a French high-wire artist was able to perform his biggest “coup” and walk between the twin towers of the World Trade Center in New York.

With the help of a clutch of assistants and friends, the Frenchman, then 24, managed to gain access to the 110th storey of the tallest building in the world 41 years ago. The audacious feat would catapult Petit to overnight stardom, as well as arrest. In this image the tightrope walker, who risked certain death with his stunt, looks back at the camera, poised and ready to cross the 200ft (61 metre) gap between the two iconic towers. He would pass along the wire eight times in his 45-minute performance – and felt confident enough to showboat on occasion – before being ordered down by the local police force. 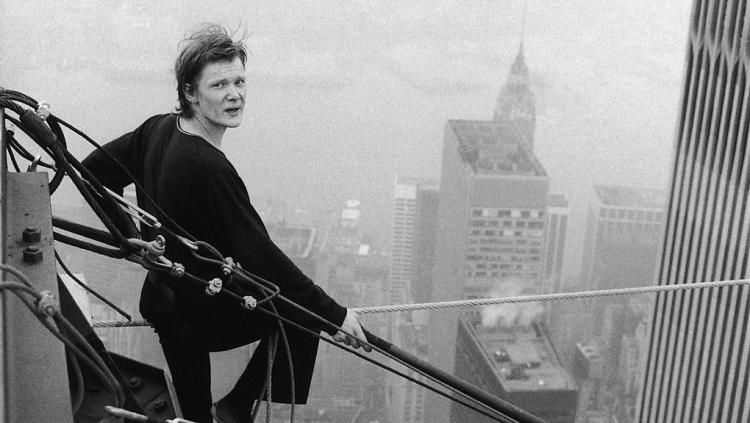 Initially people thought it was a “jumper” – someone attempting suicide. In fact they were witnessing what would become known as the “artistic crime of the century”. Petit embarked on a thrilling aerial display and, showing extreme confidence, began to showboat during his 45-minute walk, which he had been planning since he was 18.

He performed for three-quarters of an hour, before being ordered down by New York police officers. In total he made eight passes along the wire, during which he walked, danced, lay down and knelt to salute onlookers. Crowds gathered on the streets below, drivers left their cars to witness the amazing feat. Petit said later he could hear their murmuring and cheers.

In the early hours of 7 August 1974, high above the streets of New York, Petit walked the wire between the world’s tallest building’s two towers, and felt so confident that he took to showboating.

Having been arrested by New York police, and asked by the press why Petit had risked his life by walking between the twin towers of the World Trade Center, he famously answered: “There is no ‘why’. When I see a beautiful place to put my wire I cannot resist. I see three oranges and I have to juggle. I see two towers and I have to walk.” Here the Frenchman, whose achievement would never be repeated, is shown being interviewed as he is being led away from Beekman-Downtown Hospital following his arrest. He later said:

“To me, it’s really so simple: life should be lived on the edge. You have to exercise rebellion, to refuse to tape yourself to the rules, to refuse your own success, to refuse to repeat yourself, to see every day, every year, every idea as a true challenge. Then you will live your life on the tightrope.” 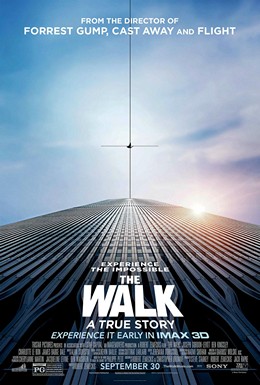 A movie based on his incredible feat of courage was released on October 2015 named ‘The Walk’.

And just before we wrap things up, here is a story you may have heard.

– Age 7 : Worked to support his family

– Age 28 : The girl he was courting refused to marry him

– Age 34 : Defeated in run for nomination for US Congress

– Age 47 : Defeated in run for nomination for Vice President

– Age 49 : Again defeated in run for nomination US Senate

– Age 51 : Elected President of the United States of America

This post was inspired by ACTIVATE YOUTH CAMP’S 2016 THEME: